I recently found this gifset on Tumblr, taken from The Sexy Lie, Caroline Heldman at TEDxYouth@SanDiego, and it stirred up a lot of memories and emotions for me.

The best way for me to describe its effect is to copypasta my reaction from my personal Tumblr, written moments after viewing this gifset.

I have been doing this ever since my ex-boyfriend started coercively raping me and abusing me in every other conceivable way when I was seventeen.

I’m almost 25 and I am just now starting to break out of this. I met my now-husband at 19 in the middle of a promiscuous streak (in what I thought was an attempt to reassert control over my body but was actually just another way of validating myself after all the abuse), and it has taken me six years to even begin addressing this. Before my husband and I got into a serious relationship, I didn’t even care about my own pleasure because I was so focused on my (incorrect) belief that if I could make another person feel good, then I was worth something; I wasn’t as scary and damaged as I thought, a belief that my ex instilled in me pretty much after the first week of our relationship.

I had extreme PTSD and undiagnosed (and therefore untreated) ultra-rapid-cycle bipolar I (I was cycling 10+ times a day, every day) when I met my ex. He was the first person I ever (thought) I loved, and I quickly became codependent and terrified of being alone. I thought all the pain was worth keeping him around, so I was complacent and took the abuse.

It took me a very long time to realize that none of it was my fault.

My current therapist told me that even without all that abuse, it’s no wonder that I’m suffering and carrying around so much baggage. I didn’t even realize I was objectifying myself until this summer, and even then I joked that “no one has to objectify me—I’ll do it myself.” I masked the pain with my characteristic dark humor to avoid having to deal with the real problem.

This post made me cry because it made me finally understand what’s been going on in my head for the last eight years.

I think it’s really important for all of us, regardless of gender orientation, to periodically “check in” and make sure we’re being kind to ourselves, mentally/emotionally and physically. It’s something I’ve really been struggling with lately, but as usual, I’m fighting like hell to make things okay inside my head.

I don’t really have the energy to write a proper, full-fledged blog post today and I apologize, but I thought this was important enough to share on DP as a thought to leave all of you with for a while. I’m going to be working pretty ferociously on the memoir outline for a few days; if it were an outline for any other project, I could breeze through it in less than a day, but these memories and observations are incredibly triggering, so I have to be very careful.

In the meantime, I have a homework assignment for my readers. Over the next couple of days, I want you to make a habit of “checking in” a few times a day. I don’t mean checking to make sure you’re still attractive and desirable—I mean making sure you’re treating yourself well: eating properly, being kind to yourself, taking care of your body, getting enough sleep. It’s important, and it’s something I often neglect. If you have the means and motivation to start a mood diary, I’d strongly recommend that, too…it has already proved invaluable over the relatively short course of my treatment.

Please stay safe if you can’t stay happy, everyone (and that’s okay, too!). I hope to have a new post up within the next couple of days.

From what I understand, it’s not at all uncommon to have trigger words— if you spend a few seconds on Tumblr, you’re likely to see tags such as “tw: rape” or “tw: abuse.”

I feel what makes my trigger words unusual is that words with negative associations don’t set me off at all; rather, words generally associated with positive things trigger the hell out of me, provoking a wave of despair and guilt so strong that it’s sometimes hard to withstand.

For years, I wondered why certain words and objects/occurrences made me feel so horrible. The sound of an ice cream truck, for example, never fails to bring on the bad feelings. Seeing an ad in a crossword book for a personalized name poem–”A special gift for a beloved child,” the ad proclaimed–made me wish I were dead so I wouldn’t have to feel so sad and guilty. I recently had to take Wite-Out to the back of a bag of milano cookies after seeing the phrase “You deserve” printed on the packaging.

It wasn’t until just a few weeks ago that I realized what all these happy, terrible things had in common, and I’m pretty sure it stems back to my inappropriate and often overwhelming feelings of guilt. From what I understand, it’s pretty common for people with PTSD to suffer from these emotions; unfortunately, it’s not something that the mentally healthy can really understand, much like my friends who aren’t depressed can’t comprehend my indifference to my own existence.

The guilt–the “dark core,” as my therapist calls it–tells me that I am unworthy of happiness, undeserving of good things—that it’s so far beyond my grasp at this point that yearning for it is pointless, not to mention pathetic.

Love, happiness, deserve, special, beloved—all of these trigger the hell out of me. Even things like ice cream can set me off because even though I know the “dark core” is, frankly, full of shit, there’s a part of me that still believes I don’t deserve good things. Years of abuse and trauma have all but ruined innocent pleasures for me, and while I’m trying very hard to correct the negative automatic thoughts, it’s a slow process and is often frustrating. Since I haven’t nailed down every single trigger (and I doubt I ever will—there are far too many of them), it’s difficult to avoid everything that triggers me, and when I’m triggered, the rush of negative emotions is strong enough to set me back and nearly undo all the progress I’ve made.

PTSD is such a bitch. Trauma is a bitch. Feeling “out of it” all the time because my defense mechanisms are operating on high-alert 24/7 is incredibly frustrating, eclipsed only by the terrible feelings that come from being triggered. I seem to be unable to handle happiness—take a moment to imagine what that must be like. But as terrible as it is, it motivates me to fight even harder to get better. I know there are so many things I’m missing out on because years of trauma have conditioned me to shy away from happiness and positive experiences (probably because I’ve experienced time and time again how fleeting happiness is). It’s easier, my brain tells me, to avoid good things than to experience them for just a moment, only to have them snatched away and replaced with heaps of horrible shit.

I am trying to stay alive. That takes up most of my energy on a day-to-day basis, and trying to overcome the triggers and seek out happiness and positivity in my life is sometimes exhausting. But I’ve never been one to shy away from a challenge or give up on something just because it’s hard.

Even though I’ve never thought I’d live a particularly long time (another thing that’s pretty common among PTSD sufferers), statistics say I’m going to be here for a while—I might as well try to make my world a brighter, better place. I don’t want to be miserable forever.

Is happiness a struggle for you? Please let me know I’m not alone. 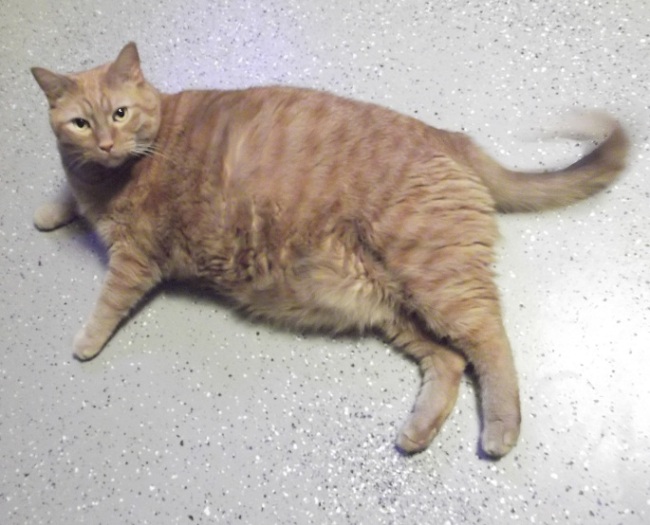 I’m having a rough day again and was pretty close to tears when this sassy ginger boy wandered into the room and bumped his head against my leg and howled.

Cats have the reputation of being aloof, but I’ve never had an Ugly Cry that wasn’t accompanied by at least one cat snuggling up next to me and purring, though it’s possible this is motivated by their enjoyment of my pain rather than a desire to comfort me.

Today is especially bad for the following reasons:

At the moment, I’m fighting off the urge to carve up my thighs like a goddamn Thanksgiving turkey again. At this point, I think some form of chemical relief is in order. This could take the form of a really stiff drink (even though it’s only 11 AM), though I’ll probably opt for an Ambien and a cat nap with cats instead. I dislike self-medicating, but there are times when it becomes a necessary evil because the alternative is even more hideous and harmful.

This most recent bout of misery is made worse by the fact that it’s a beautiful sunny day–this type of weather always seems to make the depression more severe. At least D. gets home at 3:30; it’s harder when he works the night shift because dusk has always been the most vulnerable time of day for me.

Motivators: Eggplant lasagna, the fuzzy cat sleeping on the bed, maybe taking a walk later on, the trippy coloring books I purchased on the way home (because what’s another $12 when my health issues just cost us $50?).